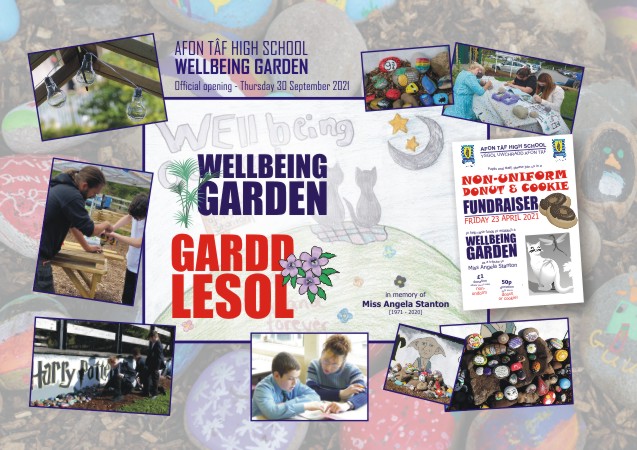 The official opening of our Wellbeing Garden in tribute to Miss Angela Stanton took place on Thursday, 30, September, 2021, the day after what would have been Angela’s 50th birthday. The opening was attended by Angela’s mother Shirley, accompanied by family friend, Joanne along with very many of Angela’s work colleagues, past and present, a measure of her popularity within the teaching profession. Those gathered, heard a heartfelt speech delivered by Headteacher, Mr Stuart James, recollecting many tributes paid to Angela by past pupils.

The sign adorning the garden’s entrance was designed by current Year 10 pupil, Erin, who was presented with a framed replica drawing and gift voucher for her efforts.

Unfortunately, the inclement weather dictated proceedings had to be conducted indoors. Mrs Stanton, visibly moved by the occasion did visit the Wellbeing Garden with Mr Stephen Baber, our Deputy Headteacher to view the array of greenery, garden furniture and pools of colourful pebbles dotted around the garden perimeter. The pebbles were all decorated by staff and pupils.

It is the intention of the School that the Wellbeing Garden will provide a place of solitude and serenity for all those who form part of our school community.

Special thanks to Lynne Colston who helped secure funding to enlist the services of Afon Gwreiddau Garden team and Nikki's team at Taff Rocks. To ex-pupil, Stephen Morris for his Herculean fundraising efforts, and to all staff and pupils who contributed to getting this project completed in such good fashion. Diolch yn fawr i chi gyd!